Our research group is composed of both experimentalists and theoreticians. In our experiments we employ microfluidic and lab-on-a-chip platforms to generate, observe, and measure different surface phenomena, which are of value to our projects. In our theoretical work we combine molecular forces, transport phenomena, and continuum density functional theory to study the structure and dynamics of complex liquids. We explain experimental results in our lab and in other labs. In particular, we are interested in several topics in the field of colloids (nano- and micro-particles) and surface phenomena. We work on passive and active oil/water phase separation, smart coatings of solids and liquids, and ion structures in the nanometer-thick electrical double layer in the presence of acoustic waves. Below we give a more detailed account of each project.

Students and postdoctoral fellows who are interested in colloids and surface science are welcome to contact us.

Passive and active oil/water phase separation
Small scale, efficient, and affordable unit operations for water recovery are necessary for local pre-treatment of contaminated water and in particular for separating oily additives from water in domestic housing and industry. This is especially of value in small and remote communities, where large scale water treatment facilities are not available and where the reclaimed water could be locally used for agriculture or domestic benefits. We study the passive and active separation of oil, water, and surfactant mixtures in the presence of a specially designed surface chemistry on solid surfaces, and in the presence of high frequency acoustics.

Smart Coatings
Several startup companies produce smart coatings and electronic circuits by coating surfaces with mixtures of conductive nanoparticles in volatile carrier liquids. Many times, they employ particle self-assembly strategies. Molecular forces in such coating systems determine the coating process alongside the flow and evaporation of the carrier liquid. We study the connection between molecular forces, coating flows, and the self-assembly of nanoparticles therein to improve the spatial resolution of coatings and nanoparticle deposits. In addition, we study new approaches for the active control of the coating process.

The electrical double layer in the presence of acoustic waves
Electrical double layers (EDLs) of ions are thick layers of ions which appear next to charged surfaces in water and traverse into the liquid for several nanometers. This is an important mechanism in chemistry and biology. It is responsible for the stability of complex liquids such as suspensions and emulsions, for the structure of large molecules such as proteins, and for energy storage systems such as super-capacitors. We study the electrokinetic contribution of MHz-frequency acoustic waves to the structure of EDLs. By generating acoustic waves near charged solid surfaces, we rearrange the structure of ions in the EDLs and change their contribution to nearby molecules, particles, and surfaces. 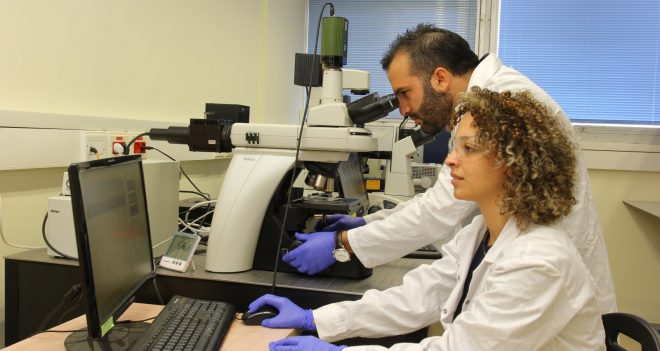